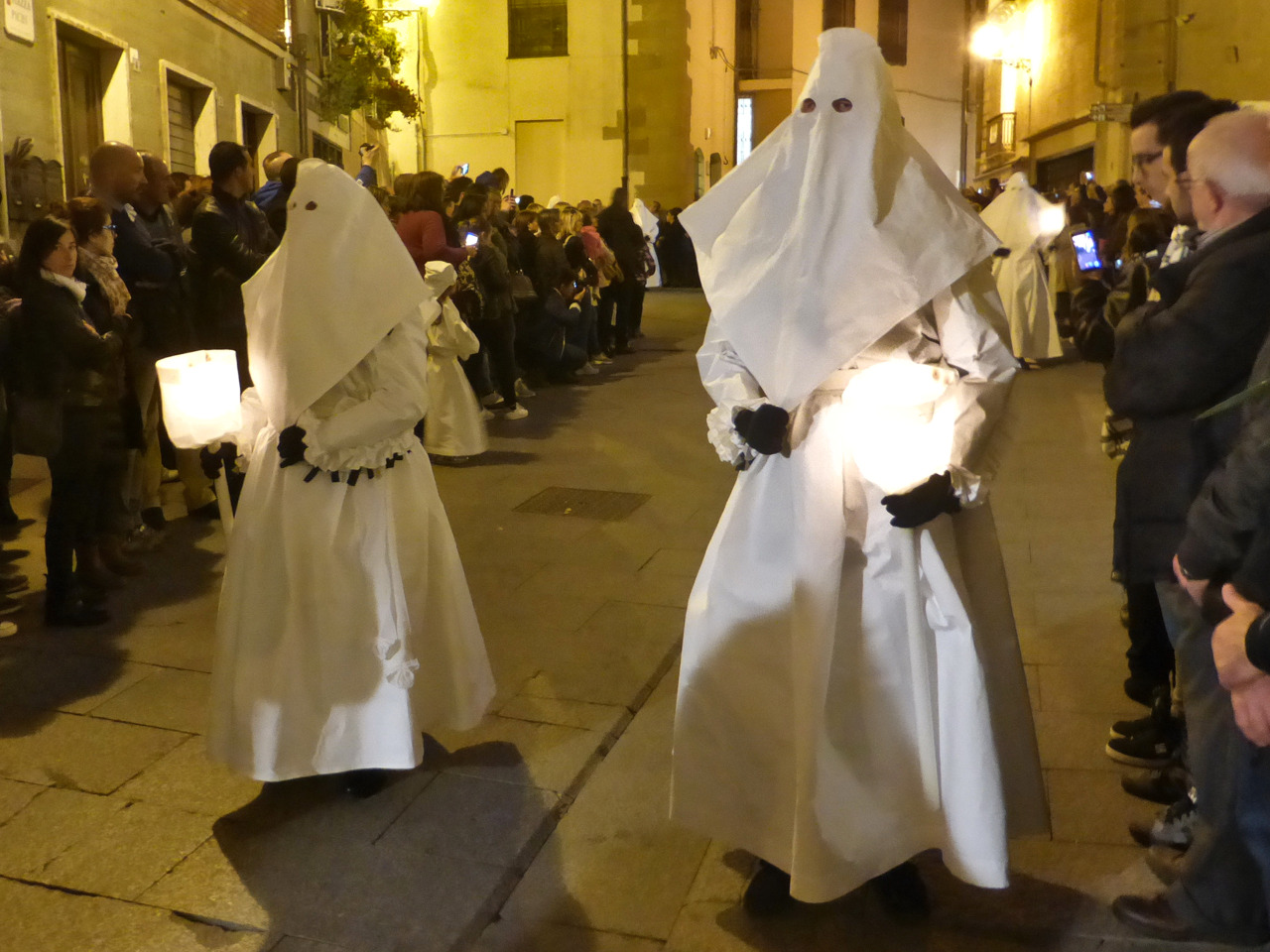 Celebrations during the holy week

In Sardinia we contrast the archaic and pagan rites of carnival to the religious, austere and hieratic rites of the Holy week.

After the imposition of Ash Wednesday and the season of Lent, that prepare to a penitential period, people take part in the Calvary, with the statues of Our Lady of Sorrows and of Jesus on the cross. Palm Sunday is also very suggestive. All plays that celebrate Christ’s passion, death and resurrection have been influenced by the Spanish domination since the Aragon period during the XV° century, but most of all during the Baroque period of XVII° century.

The choice of a theatrical performance to represent the human and divine suffering of Jesus (represented during the flagellation of the Ecce Homo, the Calvary and the Passion on the cross) has been privileged, to the joyful and mystery moment of the Resurrection.
A typical celebration of the paschal resurrection in Sardinia is “s’incuntro”, the meeting of two processions. They both start from two different churches and follow the statues of the Virgin Mary and Jesus to meet just before the Mass starts, cheered by screams of joy (and firing blanks in Barbagia) of the believers. Catalan style celebrations in Alghero, together with Spanish style celebrations in Iglesias and those that take place in Oliena in Barbagia region are of great interest.

Dedalo tour guides suggest to take part in the most ancient and meaningful rituals that take place in Orosei, Castelsardo and Santo Lussurgiu with medieval part-songs performed by the local confraternities. In Orosei rituals of the Holy week start on Ash Wednesday with the procession of the mysteries: five little statues that represent Jesus’ suffering before his Passion on the cross.

Rituals celebrated on Moundy Thursday, with liturgical and pagan elements related to the agrarian cult of fertility (i.e. Demetra, Persefone and Dionysus) that regenerates itself, are blended with the rituals of the offering of flower arrangements to the sepulchres and most of all with the “Nenneres”: legumes and cereals burgeoned in the dark to symbolize rebirth. Inside the churches the male choir of the brothers presents the “poli-voices” chant of “Gotzos” and of “Su Sepurcru”.

Also the processions that take place on Good Friday, during the seven stops at the seven churches, are accompanied by the singing of the brothers with the repetition of the “Gotzos de s’interru”. A suggestive monody, a dialogue between the sinner and a crucified Jesus, put an end to the celebrations on Good Friday.

On Easter Sunday for “s’incuntro” the “Gotzos de s’incuntro” are tuned (Regina Coeli and Magnificat). In Castelsardo celebrations of the Holy week are accompanied by the very old “poli-voices” chants, a hybrid between Gregorian chants and Sardinian polyphony performed by the choirs of the confraternity.

Celebrations start on Holy Monday (“Lunissanti”) only in Castelsardo with the procession of the mysteries instituted by the Benedectine monks during the XIII° century. They are accompanied by the wooden statue of the Pity of 1300 and by the choir of the “Stabat”. The Ceremony finishes in Tergu with the Mass and the funeral song of the “Attittu” that contemplates Jesus’ death. Late in the evening the procession passes through the streets of the historic centre of Castelsardo, lighten by the torches held by brothers and sisters, while the crowd absorbed, listen to the songs of “Miserere”, “Stabat Mater” and “Jesus”.

All choirs are composed of four voices: “bassu, contra, bogi, falzittu”. Once inside the church of S. Maria the choir will sing the “De profundis” while the celebration of the last supper will take place at the Prior’s. After dinner the choir will sing the “Te Deum”.
On Moundy Thursday’s night the Black Christ is carried during the Procession. It is a wooden cross of 1300 commissioned by the Benedictines of Tergu, similar to the one in Montecassino.

We have 177 guests and no members online