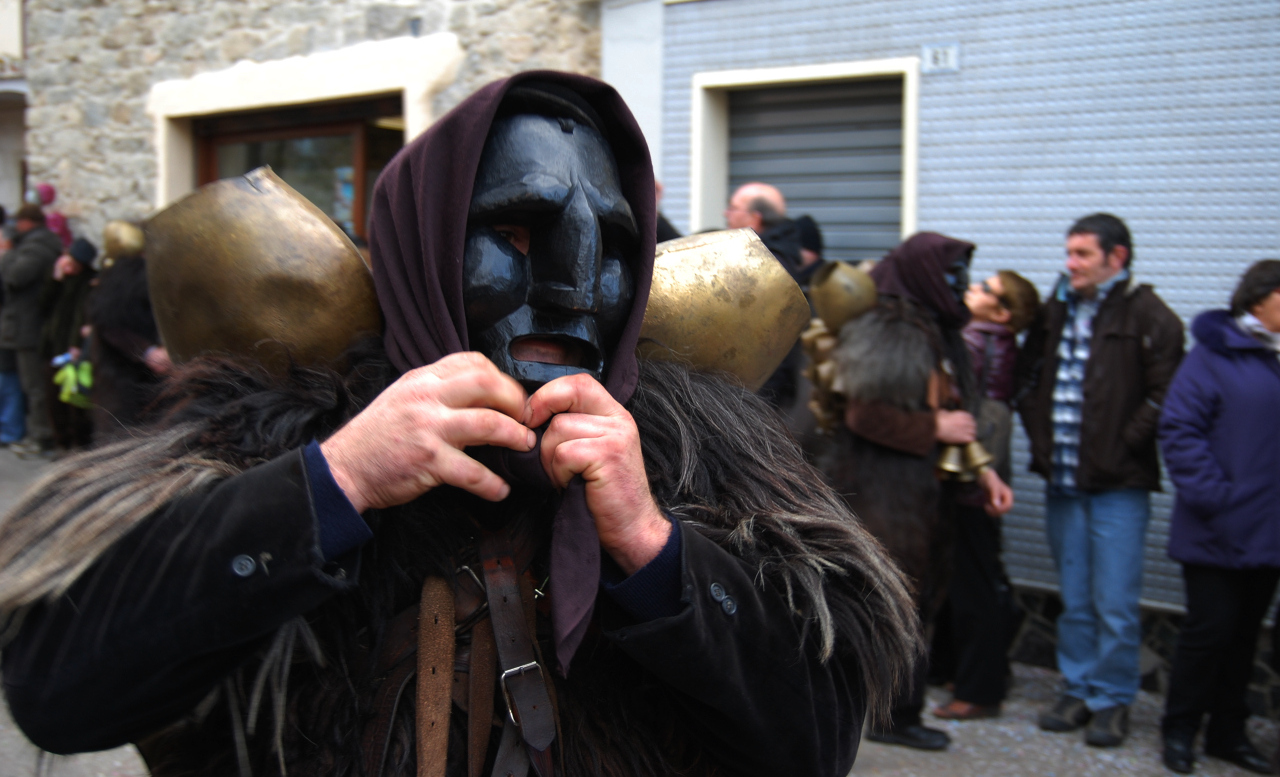 Carnival is a party dedicated to chaos and folly and should regenerate the community by inverting its roles.

Sardinian traditional carnival has nothing to do with the goliardic events we are used to see elsewhere, because our island keeps alive the origins of the ancient festival related to the orgiastic Dionysian rite of fertility.

The Sardinian carnival is a very fascinating event for its different but complimentary features and in Barbagia it keeps up its primitive and Dionysian origins connected to the obscure rite of the scapegoat: the insane of the village to whom the feast was “dedicated”, was killed, cut into pieces or burnt to redeem the whole community from sins. They used to fight evil with evil.

Carnival is a party dedicated to chaos and folly and should regenerate the community by inverting its roles. In this upside-down world, lost souls and devils from the underground world, come to surface in a loud noise. They are headed by Arlecchino, whose etymology is “King of hell” or by other poor devils like the Sardinian Mammuthone: devil and scapegoat at the same time.

The joyful appearance of Carnival is related to fertility and renewal. It represents the ancient agrarian cult of Demetra and her daughter Core-Persefone that celebrates the death of a grain of wheat in order to sprout and become spike. This renewal is performed by androgynous characters, who determine the fertility of the soil with their acts. This is the role of “Su Componidori”, hero of the Sartiglia in Oristano. This horseman, dressed up like a bride, gallops with his sword stretched out to catch a star shaped ring, hanging from a ribbon tied on both sides of a road. This is a propitiatory rite for the new agrarian season. The image of the sword that goes through the ring as good omen for future fertility, is clearly both a sexual and solar symbology.

This spectacular kind of carnival takes place also in Santu Lussurgiu. All these different and complimentary features of the carnival are part of the festivals organized in February in different Sardinian villages. Dedalo tour guides draw up itineraries for those who want to discover the origins of the Carnival, according to the dates these events take place. The Dionysian aspect is stronger in Barbagia.

In Mamoiada, 12 “Mammuthones” strike terror with their black masks made of wild pear-tree wood. They are dressed up with dark furs of black sheep and dance to the rhythm of 30 Kg bells tied on their back, played in unison with a limping gait.

The red dressed “Issohadores” catch with lazes those who are present at the parade.
These masks perform their first parade on the evening of 16th January on S. Antonio Abate’s day, he who rendered Christian the ancient cult of Prometeo’s fire.

In Gavoi, “Tumbarinos” with their face blacken with soot, strike up with their drums an obsessive rhythm that should make people go into a Dionysian trance.

In Ottana diabolic “Merdules” tie the “Boes” which are bovine like masks dressed up with white sheep furs. The “Boes” put on the stage, to the rhythm of the bells they keep hanging from their belt, a pantomime fight against the shepherd that manages to tame them. They come along with the witch “Filonzanas” (a weaver who spins mankind’s fate, an obscure Parca o Moira) and with the animal like masks of the pig, the donkey and the stag. These zoomorphic masks show the deep tie between man and animal. Man gives free play to the meanest elements of his being, to get rid of them and meanwhile to regenerate himself.

In Orotelli the sad “Thurpos”, blind and in mourning cloths, walk pushed by their shepherd that leads them tied to the plough, around the streets of the village.

In Samugheo the diabolic “Mamutzones” with masks made of cork persecute “S’Urtzu” the scapegoat that wears a musk representing a he-goat with withy horns.

In Ovodda “Sos intintos” with faces smeared with ashes and mud celebrate their carnival up to Ash Wednesday.

Another interesting carnival takes place in Bosa. People here are not allow to go as spectators as it is compulsory to take part in the festival, dressed up with white cloths. During the “attittu” day, which is the joyful mourning of the Carnival, people will have to be dressed up with black cloths.

We have 229 guests and no members online